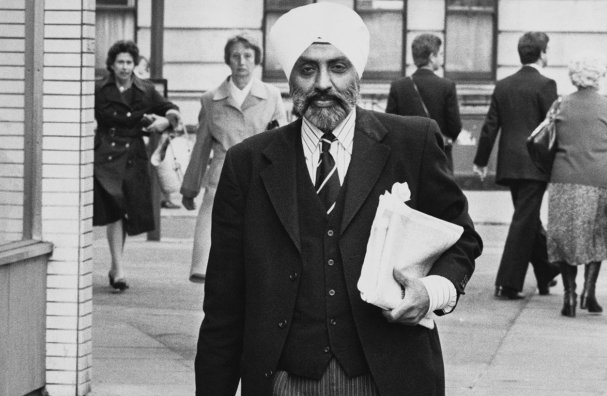 Sir Mota Singh QC, the first lawyer from a minority background, and United Kingdom’s first Asian judge, dies at age 86. He paved the way for many other ethnic minority lawyers.

Mota Singh was born in Nairobi, Kenya, in 1930. At the age of 16 his father, Sardar Dalip Singh, was fatally stabbed in Nairobi while coming to the rescue of a woman being attacked. Singh became the head of the family of four brothers and a sister. His mother was 32 years old.

His first job was as a clerk at the East African Railways and Harbours, and afterwards he secured a clerical position in a European law firm in Nairobi. The Inns of Courts in England – the training institution for barristers – permitted overseas students to complete the first part of the two-part Bar studies by correspondence. For the second part, students had to go to England. He arrived in the United Kingdom in 1953, working in the Indian High Commission, and supported financially by his wife of three years, Swaran Kaur, who also worked.

In England he passed the Bar examination in 1955. But he did not work in England. He established his own legal firm in Kenya. In 1961 he was the first non-Englishman appointed as Secretary of the Law Society of Kenya. He returned to England in 1965, which was regarded as ‘professional suicide.’ The legal profession in England was regarded as a ‘closed shop’ at the time – until the 1990s there were only one or two Asian solicitors in England. There were many hurdles for a young barrister of an ethnic minority wearing a turban.

He had no option but to take any employment as a legal advisor, but he had no legal experience in England. Six months later he was still unemployed. He pleaded for a job with a company dealing with landlord and tenant disputes, who wanted a solicitor and not a barrister such as Singh. Nevertheless they offered him a position. Eventually his application to the UK Bar was supported.

His first case was a drinking and driving offence. No turbaned barrister had ever been seen in an English court – the wig was ‘de riguer.’ Mota Singh’s appearance caused excitement and attracted the British press. The judge raised no objection to the white turban. The Times headline the next day was ‘Barrister in turban wins case.’

The Race Relations Act, introduced in the United Kingdom in 1967, led to his appointment a member of the Race Relations Board by the Home Office until 1978. He also became a leading land and tenant specialist barrister. Senior Judges were impressed. In 1978 he was appointed Queen’s Counsel (QC) – a senior barrister who has excelled themselves at the Bar, and theoretically, can be called upon by the Queen to counsel her on a legal matter.

Mota Singh made history in 1979 when he became the first person from a minority background, and the first Sikh, to be appointed to the UK judiciary. He became a full-time judge in 1982, after initially working as a part-time recorder. He was now the first judge in British history to wear a turban instead of a wig at the English Bench. The Daily Telegraph headine was, ‘JUDGE IN TURBAN TYPICAL OF AN ENGLISH GENTLEMAN.’

He is also the recipient of several lifetime achievement awards, including a knighthood in 2010 for his services to the administration of justice, community relations, and the voluntary sector, and is the first Sikh to have received this honour. He was now Sir Mota Singh.

Sir Mota Singh’s passing was honoured, not only by the Sikh community, but also by all who worked with him, including the East African Asian Senior Citizens Association in Nairobi. It is no small measure of a man who had to overcome significant hurdles, and who paved the way for changes within the English judiciary for ethnic minorities that ensure the availability of tenancies for Asian barristers. There now exists an Asian Barristers’ Chambers.

As Varinder Singh says of Sir Mota Singh, ‘he is one of the most humble persons one could come across. He is a good and patient listener, without being judgemental of others.’ The Asian Age, published in England, described Sir Mota Singh as ‘The Dignified and Humble Sikh Judge.’

Thanks to an article by Varinder Singh (Sikhchic.com), Special to The Asian Pacific Post